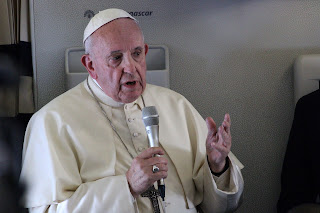 
Pope Francis Addresses Criticism of His Pontificate and Discusses ‘Schism’
On the papal plane from Madagascar on Tuesday, Pope Francis said he always welcomes constructive criticism but not ‘pills of arsenic’ which he says can come from ‘rigid’ critics who hide behind orthodoxy and should be treated ‘with meekness.’


Jason Horowitz (New York Times): Good morning, Holy Father. On the plane to Maputo, you acknowledged being under attack by a sector of the American Church. Evidently, there are strong criticisms, and there are even some cardinals and bishops, TV [stations], Catholics, American web sites — many criticisms. Even some very close allies have spoken of a plot against you, some of your allies in the Italian curia. Is there something these critics don’t understand about your pontificate, or is there something that you have learned from the criticisms [coming from] the United States? Another thing, are you afraid of a schism in the American Church and if yes, is there something that you could do, dialogue to help avoid it?

Pope Francis: First of all, criticisms always help, always, when one receives a criticism, immediately he should make a self-critique and say this: to me, is it true or is it not true, until what point? Of criticisms, I always see the advantages. Sometimes you get angry, but the advantages are there.
Then on the trip going to Maputo, one of you came... it was you who gave me the book?... One of you gave me that book... in French... yours? In French... The American Church attacks the pope... the Americans... No, the pope under attack by Americans... [Ed. note: he refers to the French book “How America Wanted to Change the Pope” by Nicolas Seneze of La Croix]. [A reporters’ voice: “How the Americans want to change the Pope”]. This is the book that you gave me a copy of, I’d heard of the book, I’d heard of it, but I have not read it. The criticisms are not only from Americans, they are a little from everywhere, even in the curia, at least those who tell me, who have the advantage of honesty to say it, and I like this. I do not like it when critics are under the table. They smile, they let you see their teeth and then they stab you in the back. This is not loyal, not human. Criticism is an element of construction and if your critic is not right, you [must be] prepared to receive the response and to dialogue, [to have] a discussion and arrive at a fair point. This is the dynamic of the true criticism instead of the criticism of arsenic pills, which this article that I gave to Fr. Vuela was talking about — throwing the stone but hiding the hand. This isn’t necessary, it doesn’t help, help the little closed groups that don’t want to hear the response to the criticism. A criticism that does not want to hear the response is throwing a stone and hiding the hand. Instead, a fair criticism, I think this, this, this... It is open to a response, and you build, help.
Before the case of the pope, "But I don’t like this of the Pope," I criticize and wait for the response, I go away from him and I speak and I write an article and I ask him to respond. This is fair, this is love for the Church. To criticize without wanting to hear the response and without dialogue is not wanting the good of the Church. It is to go backward to a fixed idea, to change the pope, to change the style, to create schism, this is clear no? A fair criticism is always well received, at least by me.
Second, the problem of schism: in the Church there [have been] many schisms. After Vatican I, the last vote, that of infallibility, a significant group left. They separated from the Church, founded the Old Catholics, to be really honest to the traditions of the Church. Then they discovered a different development and now ordain women, but in that moment they were rigid. They were going backward to an orthodoxy that they were thinking the council had gotten wrong. Another group went without voting, silent silent, but not wanting to vote.

Vatican II created these things, maybe the best known break is that of Lefebvre. There is always schismatic action in the Church, always, no? It is one of the actions that the Lord always leaves to human freedom. I don’t fear schisms, I pray they don’t exist because there’s the spiritual health of many people [to consider], right? [I pray] there will be dialogue, that there will be correction if there is some mistake, but the path of schism is not Christian.
But let’s think back to the beginning of the Church, how the Church began with many schisms, one after another, it is enough to read the history of the Church. The Arians, the Gnostics, the Monophysites, all of these. Then it comes to me to recall an anecdote that I have told a few times: it was the people of God who saved [the Church] from schisms. Schismatics always have one thing in common: they separate [themselves] from the people, from the faith of the people, from the faith of the People of God. And when, at the Council of Ephesus, there was a discussion on the maternity of Mary, the people — this is historic — were at the entrance of the cathedral and when the bishops entered for the Council, they had sticks, they showed them the sticks and yelled: "Mother of God, Mother of God." As if to say, if you do not do this, here's what awaits you. The People of God always mend and help.
A schism is always an elite condition of an ideology separated from doctrine. An ideology may be right, but that enters into doctrine and separates and becomes 'doctrine' in quotes, but for a time. For this, I pray that there are no schisms. But I am not afraid.
To help, but what I am saying now, you are not afraid I respond to criticism, I do all this, maybe if someone comes to him, something I have to do, I will do it. To help.
But this is one of the results of Vatican II. It is not from this Pope or from another Pope or that other pope. For example, the social things that I say are the same that John Paul II said, the same. I copy him. "But the Pope is very communistic, huh?" Ideologies and doctrine enter, and when the doctrine strays into ideology, there is the possibility of schism.
And also there is the behaviorist ideology, that is, the primacy of a sterile morality over the morality of the People of God, who even the pastors should guide, the flock, between grace and sin. This is evangelical morality.

Instead, a morality of ideology, such as Pelagianism, to put it that way, makes you rigid and today we have many, many schools of rigidity inside the Church. They are not schism, but they are pseudo-schismatic Christian paths that in the end finish badly. When you see rigid Christians, bishops, priests, behind them are problems; there isn’t the holiness of the Gospel. For this we should be meek, not severe, with people who are tempted by these attacks, because they are going through a problem, and we should accompany them with meekness.