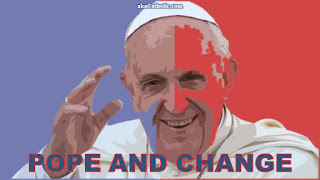 When it comes to migration, Vatican’s as progressive as they come

ROME - When it comes to what one might call “domestic policy,” the Catholic Church is often considered to be a conservative institution. It promotes the sacredness of marriage between a man and woman and the inviolability of human life, making things such as divorce, abortion and gay marriage major no-nos.

Yet, when it comes to relationships between nations and global policy, the Holy See can come off as among the most liberal organizations in the world.

...
Given this evident climate of distrust - if not downright fear - of immigrants, the Catholic Church’s contribution to the compacts is even more astounding.

For the better part of two years, the Holy See has been cooperating, suggesting and promoting the UN endeavor, in line with Pope Francis’s efforts to make the welcoming of immigrants the lasting legacy of his pontificate.

The Vatican’s Section on Migrants & Refugees, with the collaboration of several Bishops’ Conferences and Catholic NGOs, presented Twenty Action Points on Migrants and Refugees that are not just progressive, but downright revolutionary given the global context.

o    Immigrants and refugees should have access to health care, minimum wage and education;
o    They should have the freedom to choose where they to live;
o    Child detention must be avoided and families, even extended relatives, should be reunited independent of financial requirements;
o    The international budget for welcoming states should be amplified;
o    Citizenship should be recognized at birth and countries must provide quick, safe and accessible paths to citizenship;
o    The requisite of knowing the local language for immigrants, especially when over 50, should be dismissed for the purpose of gaining citizenship.

These are just a few examples of the Vatican’s agenda when it comes to promoting immigrants and their free mobility around the globe. Added to this list, is the Holy See’s effort to remove the distinction between refugees and immigrants, a fundamental classification that determines the behavior of welcoming countries toward newcomers.

Even German Chancellor Angela Merkel, a champion of immigrants in Europe despite powerful national and international opposition, could not have presented such guidelines without risking losing the precarious conservative support keeping her in power.

..
“The adoption of the Global Compact on Migration comes at a critical moment in history,” said the Vatican Secretary of State, Italian Cardinal Pietro Parolin, during his speech and the intragovernmental conference in Morocco Dec. 10.

When “not managed well,” he added, “crises can form, rhetoric can eclipse reason, and migrants can seem more as threats than as brothers and sisters in need of solidarity and basic services.”

“The Holy See is convinced that the enormous challenges that migration poses are best faced through multilateral processes rather than isolationist policies,” Parolin concluded.

Cooperation sometimes also means compromise. While the compact reflects in many ways the Catholic view on migration, it also includes indications concerning reproductive health “that do not recognize the inherent value and dignity of human life at every stage of its beginning, development and end,” as Parolin described, adding that the Holy See “will present its reservations in due time.”

Progressive or not, the Catholic Church’s view of immigration will have to confront itself with the willingness of states to adopt it and implement it. So far, the reality on the ground is a far cry from the ideals presented in the compact, and certainly in the Vatican’s Twenty Points, Appleby observed.

According to the researcher, “the success of the compact will be measured one migrant life at a time,” as immigrants today face struggles such as poverty, exploitation, detention and family separation.

“If the compact can mitigate these deterrent policies, then I think it will be a success,” Appleby said, and if nations and international entities including the Holy See can promote an effort of collaboration and multilateralism “it will have been worth the effort.”