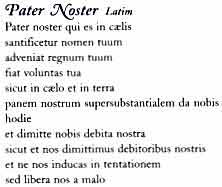 
Revealing the shallowness of his theological formation, such as it is, Bergoglio exhibited  laughable incomprehension of the true sense of our Lord’s petition “and lead us not into temptation…” Said Bergoglio to Pozza: “But it’s not him [God] who throws me into temptation to then see how I have fallen.  No, a father doesn’t do this. The one who leads us into temptation is Satan.” Once again imposing his uninformed opinion, Bergoglio had already demanded that the Italian bishops abandon the traditional translation (“e non ci indurre in tentazione”) in favor of “and do not abandon us in temptation” [“e non abbandonarci nella tentazione”].
Sandro Magister notes that during an extraordinary session of the Italian bishops’ conference (CEI) called to consider Bergoglio’s demand—under the President he had handpicked to control the CEI—“[t]he ‘old’ version was not even put to a vote, so that it was impossible to defend it.” As the increasingly contemptuous Magister observes of this latest Bergoglian farce: “Logically, if God cannot ‘lead’ us into temptation, we don’t see why he is allowed to ‘abandon’ us to it. For two millennia the Church has never dreamed of changing that difficult word of the Gospel, but rather of interpreting and explaining it, in its authentic meaning.”
In an interview with Life Site News, the Swiss linguist and Bible scholar Father Reto Nay, joining the swelling ranks of orthodox Catholics who have had enough of this circus, makes short work of Bergoglio’s junk theology:  “The text of the Our Father is passed down to us in the New Testament, which was written in ancient Greek. The phrase ‘and lead us not into temptation’ is contained both in Mt 6:13 and Lk 11:4 with identical wording: καὶ μὴ εἰσενέγκῃς ἡμᾶς εἰς πειρασμόν. This means that the wording of the petition in question cannot be blamed on a transmission error or misunderstanding.”
As Fr. Nay further explains:

The Roman Church may have used the Greek original in the beginning. But it quickly changed to Latin: “et ne nos inducas in tentationem” which is a literal translation of the Greek. So is the English version “and lead us not into temptation,” or the Italian “non ci indurre in tentazione.”
These versions are the result of translating the verb εἰσφέρω/εἰσενέγκῃς (= to lead into, to bring into) and the noun πειρασμός (= temptation, putting to proof). The original text does not offer the possibility of an alternative translation. I am not aware of any period in Church history when this translation was questioned. There is simply no grammatical or syntactical reason to do so.

Of course, Bergoglio doesn’t think he needs a grammatical or syntactical reason to alter the 2,000-year-old translation of the very prayer God Himself dictated in the flesh. Bergoglio doesn’t like it, so it has to go.
But the substitute wording Bergoglio maneuvered to obtain in Italy is theological nonsense, as Father Nay notes:

I have no idea where the “and do not abandon us to temptation” comes from. Deuteronomy 4:31 says, “Because the Lord your God is a merciful God, he will neither abandon you nor destroy you; he will not forget the covenant with your ancestors that he swore to them” (a similar reference is made in Psalm 94:14). If this is true (and it is), why then should we pray “and do not abandon us to temptation.” It also seems to insinuate that God actually could “abandon” us in temptation which comes close to blasphemy because it puts the blame on God when we abandon him. But 2 Chronicles 15:2 says, “if you abandon him, he will abandon you.”

To the objection that God would not “lead” us into temptation either, Father Nay replies with the obvious point that “the text does not say that God is the originator of the temptation; the devil is or men…. In this sense, Christ is led into the wilderness by the Holy Spirit ‘to be tempted by the devil’ (Mt 4:1)…” That is, he is subjected to a trial, in order to show us that trials in the form of temptations are to be expected in keeping with the revealed truth that “all who want to live a godly life in Christ Jesus will be persecuted (2 Tim 3:12),” with temptation being precisely a test of faith under persecution by the devil or his minions—a test we are able to pass if we correspond to God’s grace.
Here I would note that Saint Paul explains this quite precisely: “But God is faithful, who will not suffer you to be tempted above that ye are able; but will with the temptation make also the way of escape, that ye may be able to endure it.” (1 Cor 10:13). That is, God will subject us to the trial of temptation, but will also provide us with the means to overcome it. He will not abandon us to temptation, although we may abandon ourselves by rejecting His grace. This datum of revealed truth is obviously lost on Bergoglio, who operates on the assumption that what he thinks “is Magisterium.”