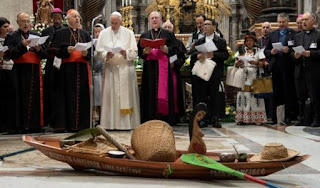 PETITION: Call on Vatican to remove all "pagan" symbols from St. Peter's and the Synod Hall!

The First Commandment: “I am the Lord thy God, thou shalt not have any strange gods before Me.”
Please SIGN this urgent petition asking Vatican officials to remove the mysterious statue of a nude, pregnant indigenous woman that has featured prominently in various events and ceremonies involving the Pope.
Since just before the beginning of the Synod till present, the statue has been stationed in St. Peter’s Basilica, the Synod Hall and the Vatican gardens.
This is a problem because at least one indigenous leader has identified the original ceremony involving the same statue as “pagan."
And, because it sows seeds of confusion and syncretism, which is defined as the attempt to amalgamate different religions, cultures, or schools of thought.
Last week, for example, a Dominican panelist at the Holy See Press Office conceded that the statue is open to interpretation, as either the Virgin Mary or Mother Earth!
Later, the Vatican denied that the statue represents the Virgin Mary, but they have not confirmed what the statue actually does represent!
But, even allowing such a statue on the Vatican property simply confirms that the critics of the Amazon Synod were correct when they predicted that the Synod would be a foray by paganism against the divinity of Jesus Christ and His Church.
Now we can see that even the place of the Blessed Virgin Mary in the economy of salvation is being questioned!