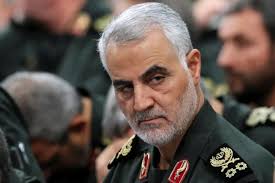 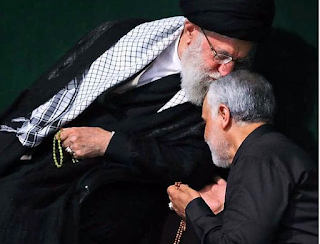 Terrorist general with the blood of THOUSANDS on his hands: Qassem Soleimani masterminded the killing of hundreds of US troops in IED attacks, helped Assad slaughter his people in Syria, was an ally of Hezbollah and 'more powerful than Iran's president'

Quds commander Qassem Soleimani, who was killed Friday in a US strike, was one of Iran's most prominent figures who orchestrated thousands of killings on behalf of Tehran in attacks on the West and allies in the region.
As the head of the Quds - or Jersualem - Force of Iran’s paramilitary Revolutionary Guard, Soleimani was officially charged with protecting the Islamic revolution, and in practice was used to enforce the regime's will across the Middle East.
Commonly known as the second most powerful man in Iran, wielding more influence than the president, he was seen by many as a future leader.
His CV included helping Shia militias to kill hundreds of American troops during the US invasion of Iraq,  backing Assad as he slaughtered civilians by the thousands during the Syrian civil war, and most recently overseeing the slaughter of hundreds of anti-Iran protesters in Iraq.
Born into a poor agricultural family in Kerman province, central Iran, in 1957 he worked in construction and then a city water department before the 1978 Islamic Revolution began.
As protests against the Shah grew, Soleimani was involved in organising demonstrations against the monarch.
After the Shah was deposed, Soleimani joined the Revolutionary Guards at its formation in 1979, then served as leader of a company that helped repel Saddam Hussein's invasion in 1980.
He was promoted to commander of a division while not yet 30 and by the mid-Eighties was organising missions inside Iraq to undermine the Hussein regime, often bullying, bribing and otherwise exploiting Iraqi Kurds.
In 1999, during student protests in Iran, he threatened to topple the government in order to crush the demonstrations, and in 2002 - just a few months before the US invaded Iraq - he was promoted to head of the Quds Force.
US officials say the Guard under Soleimani taught Iraqi militants how to manufacture and use especially deadly roadside bombs against US troops after the invasion of Iraq, resulting in the deaths of some 600 US troops.
Soleimani himself was popular figure among pro-regime Iranians, who saw him as a selfless hero fighting Iran’s enemies abroad.
To his fans and enemies alike, Soleimani was the key architect of Iran's regional influence, leading the fight against jihadist forces and extending Iran's diplomatic heft in Iraq, Syria and beyond.
'To Middle Eastern Shiites, he is James Bond, Erwin Rommel and Lady Gaga rolled into one,' wrote former CIA analyst Kenneth Pollack in a profile for Time's 100 most influential people in 2017.
'To the West, he is... responsible for exporting Iran's Islamic revolution, supporting terrorists, subverting pro-Western governments and waging Iran's foreign wars,' Pollack added.
With Iran roiled by protests and economic problems at home, and the US once again mounting pressure from the outside, some Iranians had even called for Soleimani to enter domestic politics.
Western leaders saw him as central to Iran's ties with militia groups including Lebanon's Hezbollah and Palestinian Hamas.
In secret US diplomatic cables released by WikiLeaks, US officials openly discussed Iraqi efforts to reach out to Soleimani to stop rocket attacks on the highly secured Green Zone in Baghdad in 2009.
Another cable in 2007 outlines then-Iraqi President Jalal Talabani offering a US official a message from Soleimani acknowledging having 'hundreds' of agents in the country while pledging, 'I swear on the grave of (the late Ayatollah Ruhollah) Khomeini I haven´t authorized a bullet against the US.'
US officials at the time dismissed Soleimani's claim as they saw Iran as both an arsonist and a fireman in Iraq, controlling some Shiite militias while simultaneously stirring dissent and launching attacks.
US forces would blame the Quds Force for an attack in Karbala that killed five American troops, as well as for training and supplying the bomb makers whose improvised explosive devices made IED - improvised explosive device - a dreaded acronym among soldiers.
In a 2010 speech, US General David Petreaus recounted a message from Soleimani he said explained the scope of Iranian's powers.
'He said, "General Petreaus, you should know that I, Qassem Soleimani, control the policy for Iran with respect to Iraq, Lebanon, Gaza and Afghanistan",' Petraeus said.
The US and the United Nations put Soleimani on sanctions lists in 2007, though his travels continued.
In 2011, US officials also named him as a defendant in an outlandish Quds Force plot to allegedly hire a purported Mexican drug cartel assassin to kill a Saudi diplomat.
But his greatest notoriety would arise from the Syrian civil war and the rapid expansion of the Islamic State group.
Iran, a major backer of Assad, sent Soleimani into Syria several times to lead attacks against IS and others opposing Assad's rule.
While a US-led coalition focused on airstrikes, several ground victories for Iraqi forces came with photographs emerging of Soleimani leading, never wearing a flak jacket.